Did you survive having six teams on a bye? How about all the injuries and inefficient performances? All that can leave you scratching your head, but that’s all part of the challenge of managing your fantasy team. If you play Dynasty, you’re in it for the long haul. Still, it’s a weekly game, and you have to ride the ebbs-and-flows and see what it can mean for the trajectory of a player. That’s what the Stock Watch is all about. We watch the games, process the information, and try to forecast where players are headed. After all, getting ahead of the curve is the way to succeed. So, below you’ll find one player that improved their position and one that’s going the wrong way from each position. Use this as a guide as you’re trying to make moves and evaluate your team this week! 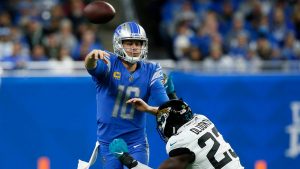 About: At one point, the Lions were 1-6, and a lot of questions were being asked about the future. That included whether Goff would be a candidate to be replaced by a high draft pick. Those questions have faded as the Lions sit at 6-7, fresh off a win over the Minnesota Vikings, and now back squarely in the playoff hunt. Goff has completed more than 65 percent of his passes, throwing for 3,352 yards and 22 touchdowns, already more yards and touchdowns than he had in all of 2021. Goff looks like a solid and capable starter, one that could help lead the Lions to the playoffs this year and beyond. In dynasty, it’s starting to look like Goff has a future beyond 2022.

About: Trubisky is an interesting case. At one point, he was the No. 2 overall pick by the Chicago Bears. His tenure in Chicago was up and down at best. After departing the Bears, Trubisky spent a year learning and backing up Josh Allen in Buffalo. This off-season, Trubisky signed with the Steelers as another shot. It didn’t last long before Trubisky was replaced by rookie Kenny Pickett. When Pickett went out Sunday, Trubisky got another shot as the Steelers fell short to the Ravens. Trubisky is just 1-3 as a starter, throwing for 1,073 yards, four touchdowns, and five interceptions. It’s clear that going forward, his value will be little more than as a backup. Those that hoped he might get a shot at relevance can let that dream go.

About: The Jets have struggled with production in the running game since Breece Hall was lost for the season in Week 8 of the season. The team has second-year back Michael Carter, who has battled injuries and traded for James Robinson, who hasn’t made much of an impact. For the past three weeks, it’s been rookie Knight who has added a spark to the Jets’ backfield. Knight has 46 carries, turning into 230 yards and a touchdown, catching 10 passes for 68 yards. Those that picked up Knight might have lucked into a player that could be a key contributor down the stretch and in the future as the Jets build a young roster poised to compete for years to come.

About: We were all excited when Edwards returned from injury, but it didn’t amount to much. In four games carrying the load, Edwards managed just 195 yards. Three touchdowns helped, but it was the volume fans had hoped to see. Now, J.K. Dobbins is back, and he looked great in his first game off the injury list. It magnifies the issues for those holding Edwards hoping to see a regular fantasy contributor. His uneven, touchdown-dependent production makes him a risky bet in weekly lineups. His future role is also somewhat murky, making him a risky roster bet in general for a dynasty team. 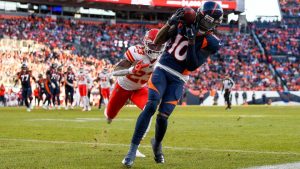 About: It’s been a rough ride for Jeudy and the Broncos. As a fan, I share the frustration of those that drafted Jeudy high, hoping for a solid weekly play. The Broncos’ uneven quarterback play and offensive production are in part to blame, but it’s also been uneven performances from Jeudy. On Sunday, we saw a spark of how his talent could be used. Jeudy was in the midst of a dreadful game when he lost his cool. But instead of coming apart, he caught fire. Jeudy ended with seven receptions for 68 yards and three touchdowns, clicking finally with Russell Wilson and looking like the We’d like to see more consistency, but it’s an encouraging sign that Jeudy and the Broncos are figuring it out. That’s a boon to those who invested in Jeudy and are waiting for a good return on that investment.

About: Evans has been reliable since he was drafted. He has had at least 1,000 yards in each of his eight seasons. It seemed like this year, with Tom Brady, things would be the same. But it’s been a struggle of late. Evans has just 59 receptions for 805 yards through 14 weeks. He hasn’t had a touchdown since Week 3 and hasn’t had more than 59 receiving yards in any game since Week 9. In short, for those hoping for solid production in the fantasy playoffs, Evans is a risky bet.

About: For a number of years, Engram has been about unrealized potential. This season, he’s not only stayed healthy for the Jaguars but he’s also produced. Engram has appeared in all 13 of the Jaguars’ games, and he’s seeing consistent targets. He has 53 receptions for 548 yards and four touchdowns. Quietly, he’s sitting as TE4 on the season. He seems to have found a fit in Jacksonville, which could make him a great find for those that took a shot this off-season.