Week one of the fantasy playoffs is in the books. Did you survive? If not, you’re probably already looking ahead to 2023. If you play Dynasty, you’re in it for the long haul. Still, it’s a weekly game, and you have to ride the ebbs-and-flows and see what it can mean for the trajectory of a player. That’s what the Stock Watch is all about. We watch the games, process the information, and try to forecast where players are headed. After all, getting ahead of the curve is the way to succeed. So, below you’ll find one player that improved their position and one that’s going the wrong way from each position. Use this as a guide as you’re trying to make moves and evaluate your team this week! 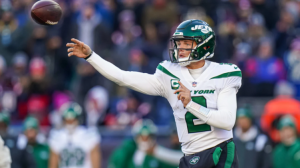 About: Wilson was benched three weeks ago. Not just benched, but a healthy scratch. Meanwhile, Mike White came off the bench and lit it up in the passing game. Still, that didn’t equate to a ton of success. White went 1-2 as a starter, giving his all in each game. When he wasn’t healthy enough to go, Wilson got a chance to return. The question was how he’d respond. The Jets didn’t win and now sit at 7-7 and are seemingly sliding out of the playoff race. But this is about Wilson and how he would respond. Wilson responded with a season-high 317 yards, throwing two touchdowns and an interception. It wasn’t lights out, but it could be enough to keep him in the starting lineup, giving hope that the former No. 2 overall pick can get back on track.

About: Potential is the biggest thing Ridder, a Third-Round pick, has had going for him. The Falcons, after slumping to 5-8, decided to see what Ridder’s potential is. This rankled veteran Marcus Mariota to the point that he opted for season-ending knee surgery. Still, it seemed like a four-week period to see what the Falcons have in Ridder. His first start wasn’t promising. After a bye week to prepare and 13 weeks shadowing Mariota, Ridder came out and threw for less than 100 yards in his first start. He finished 13-for-26 for 97 yards. He rushed six times for 38 yards, too, but it wasn’t much of a showing in a game the Falcons lost by three points despite getting a great performance from running back Tyler Allgeier. This is the audition to see if Ridder can be the answer, and, at this point, it’s off to a rocky start.

About: The fact the Falcons were in the game with the Saints is a credit to Allgeier, the rookie running back who is really coming on as the season winds to a close. Allgeier rushed for 139 yards and a touchdown on 17 carries. He has 743 yards on the season, averaging five yards per carry. With a strong finish, he could get to 1,000 yards and, more importantly, is looking like a potential workhorse back for the Falcons. That’s good news for fantasy players who got him at a value in the 2022 Rookie Drafts.

About: I still love Kamara’s talent, but it’s time to be realistic about our expectations. Kamara is still getting volume, but he’s not producing big performances or touchdowns. That’s lowered his prospects. He’s also getting older, is trapped on a middling to poor offense, and carries a big price tag. The window for production for elite running backs is small, and Kamara may well be running through his. He’s RB16 on the season, averaging 14.3 points per game. But since Week 9, he’s RB36, averaging just 9.1 points per game. It’s possible he bounces back, but for dynasty teams—especially those out of the title race in the near term—he’s an asset I’d look to move while his perceived value remains high.

About: Gage is a journeyman receiver whose signing with the Buccaneers went under the radar. That makes sense. The team had Chris Godwin and Mike Evans and added a Hall of Fame name in Julio Jones. And yet, of late, it’s been Gage that’s making the biggest impact. He’s missed some time due to injury this season, but he’s also had some strong games. That includes catching three touchdowns in the past two weeks. The Buccaneers’ offense hasn’t been incredibly reliable, and there are still a lot of pieces there, but Gage has produced sneaky production that bears watching going through the fantasy playoffs.

About: Fantasy is about opportunity and a path to targets. This was a big season for McKenzie to take a step up after the Bills let Cole Beasley move on. McKenzie seemed to top veteran Jamison Crowder, and with Crowder out injured most of the season, it was a clear opportunity for McKenzie to take a big step forward. But it’s been an uneven journey. With the Bills re-signing Beasley for the stretch run, it seems to be an indication the team isn’t ready to rely on him in crunch time. For those hoping to see McKenzie develop into a reliable weekly start, this is nothing less than a setback.

About: Tight end can be a difficult position for fantasy. What we’re looking for is at least a consistent shot at opportunities for production. Johnson seems to have settled into a defined role for the Saints, particularly in the second half of the season. That’s resulted in 55 targets, 35 receptions, 416 yards, and seven touchdowns. At a position that’s become increasingly difficult to field, Johnson looks like one of the 2022 breakouts. There are plenty of questions about the future for the Saints, but Johnson looks like a decent player to stash and ride out for the balance of 2022.