Christmas has come and gone, and if you’re like many, this week’s NFL slate didn’t leave you many presents. If you’re still alive, congratulations! If not, you’re probably already looking ahead to 2023. When playing dynasty, you’re in it for the long haul. Still, it’s a weekly game, and you have to ride the ebbs-and-flows and see what it can mean for the trajectory of a player. That’s what the Stock Watch is all about. We watch the games, process the information, and try to forecast where players are headed. After all, getting ahead of the curve is the way to succeed. So, below you’ll find one player that improved their position and one that’s going the wrong way from each position. Use this as a guide as you’re trying to make moves and evaluate your team this week!

About: There are questions about the 49ers’ quarterback situation in 2023, and the strong play of Purdy isn’t making them any easier. The 49ers’ mortgaged a lot to move up and take Trey Lance as the No. 3 overall pick in the 2021 NFL Draft. To this point, Lance is 2-2 as a starter, with 797 yards passing, five touchdowns, and three interceptions. It’s fair to say the 49ers still don’t know what they have. With Lance out, the 49ers went back to veteran Jimmy Garoppolo, who has looked good when available. But he’s also struggled with injuries and is set to be a free agent after the season.

Enter Purdy, the dead-last pick in the 2022 NFL Draft. He inherited plenty of pressure and a team ready to compete. So far, he’s risen to the challenge. He’s 3-0 as a starter, completing 67 percent of his passes for 912 yards, eight touchdowns, and three interceptions. The 49ers have won the NFC West and appear on track for a high seed in the playoffs. Purdy has looked great, and with a strong final two games and solid playoff performance, he could give the 49ers plenty to think about this off-season. He should be rostered everywhere.

About: Whatever the opposite of Purdy has been is where we find Willis. The Titans drafted Willis in the Third Round, and it was hard to tell if it was a steal. The quarterback was viewed as a raw prospect but also possibly the one in the 2022 class with the highest ceiling. With Ryan Tannehill out after ankle surgery, the Titans needed Willis to start against the lowly Houston Texans. The Titans also needed a win to remain in the playoff race. Willis wilted under the pressure. In three starts, he’s 1-2 with a 50.8 completion percentage, 276 yards, and three interceptions. And this week, he gets the Cowboys on a short week. Nothing we’ve seen indicates Willis has a future as a franchise quarterback, and doubtless, whoever takes over as general manager of the Titans will see the same thing.

About: Has there been a player whose value has swung more in a single NFL season than Akers? He started with promise, fell off sharply, looked like he was done in Los Angeles, and now is just about the best player on the team’s offense. He also looks like he’s getting back some burst, now that he’s a year and a half removed from his injury, and could be capable of carrying the running game for the Rams. On Sunday, against a decent Broncos’ defense, Akers carried 23 times for 118 yards and three touchdowns. He has 559 yards and seven touchdowns, averaging 3.8 yards per carry. It’s a start. I suspect in year four, we’ll see Akers take another step forward, meaning the buy-low window is rapidly closing.

About: I love Swift’s talent and potential. Over his two-plus years in Detroit, we’ve seen flashes. That’s been enough to keep him atop dynasty rankings despite injury concerns and questions about whether he can carry the load. In 2022, those questions have magnified. He’s appeared in 12 games so far, just one short of his previous seasons, and yet he’s only carried 82 times for 439 yards. He’s also only got 37 receptions for 289 yards. He has six touchdowns, but he’s become an inconsistent bet for fantasy with only two games of 10 or more carries and only three games with more than five targets. I still like Swift’s talent, but it’s time to be honest about his value. He has great upside but an unclear path to volume, making him a risky bet among the top 12 players at the running back position. 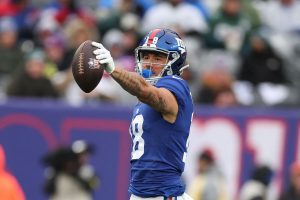 About: Sometimes, all you need is an opportunity. Hodgins entered the league in the 2021 NFL Draft, grabbed by the Buffalo Bills. He didn’t get a reception as a rookie and had only four in two games in 2022. But then he was snagged by the receiver-needy Giants. Here, he’s gotten a chance to be on the field, and he’s shown his ability to compete. With the Giants, Hodgins has 36 targets for 29 receptions, 309 yards, and three touchdowns. The Giants have a lot of questions on offense and a lot of holes to fill. Hodgins is a player worth grabbing and stashing moving forward.

About: Jones will end up in the Hall of Fame, but when he does, these last two seasons will be largely forgotten. Jones made a splash last off-season in a trade to the Tennessee Titans. Though the team won 12 games and was the No. 1 seed in the AFC, Jones was hardly a factor. This off-season, he moved to Tampa Bay to play with Tom Brady. Again, it was supposed to be the missing piece in a title run. Instead, the Buccaneers’ offense is woeful, the team is 7-8, and Jones has been a relative non-factor. It’s likely this is the last run for Jones and probably far too late for those holding on in dynasty to get any return.