That was one wild ride for the Dynasty Championship Week. If your league plays in Week 18, you have another week to go. Also, you should change that. But, for most, this was Championship Week, and boy, did we get some welcome presents. Especially from Mike Evans, who exploded for three touchdowns.

Still, if you play Dynasty, you’re in it for the long haul. But it’s a weekly game, and you have to ride the ebbs-and-flows and see what it can mean for the trajectory of a player. That’s what the Stock Watch is all about. We watch the games, process the information, and try to forecast where players are headed. After all, getting ahead of the curve is the way to succeed. So, below you’ll find one player that improved their position and one that’s going the wrong way from each position. Use this as a guide as you’re trying to make moves and evaluate your team this week!

About: We began this season with more questions than answers about Jones. Could he be a franchise quarterback? Could the right coach turn him around? And could he really be the Giants’ future? Even the Giants weren’t sure, which is why they passed on his Fifth-Year option. Turns out the answer to all those questions is yes. Despite a dearth of receiving talent, Jones has consistently gotten it done. That included a monster four-touchdown performance on Sunday as the Giants beat the Colts 38-10 to move to 9-6-1 on the season and lock up a trip to the playoffs. Now, it seems the Giants want both Jones and Saquon Barkley back, a massive turnaround from what it looked like just a year ago. And Jones looks like he’s clearly the best of a limp quarterback class from 2019.

About: Now on his third team, this was Wentz’s second chance to try and establish himself as the quarterback to lead the Commanders. Instead, against a Browns’ defense that has been middling all season, Wentz had a horrendous game. He threw three interceptions, produced no touchdowns, and saw the Commanders lose by two touchdowns at home, eliminating them from playoff contention. If you’re holding Wentz hoping for a resurgence, it’s time to make other plans. It appears his best future is finding a place to be a backup in 2023 because his time as a meaningful starter has flamed out.

About: Etienne was one of the more polarizing picks in the 2021 rookie draft. He was taken in the First Round by the Jaguars, signifying potential. But some were unsure if he could carry the load. He went in the First Round of rookie drafts, for most, the second running back selected. Unfortunately, we didn’t get to see him play in his rookie year. Given what a disaster the Jaguars were in 2021, that might have been for the best. In his second season, he seemed to be in a timeshare with James Robinson. But as Robinson was cut free early in the season, it became clear this is Etienne’s backfield. And he’s risen to the occasion. Through 17 games, Etienne has 1,108 yards and five touchdowns, averaging 5.2 yards per carry. He also has 33 receptions. And in the crunch, when the Jaguars have needed it most, he’s risen to the occasion. In the last three games—needed wins over the Cowboys, Jets, and Texans—Etienne has 294 yards rushing. He looks like one of the 20 best backs in the NFL going forward for a Jaguars team on the rise. That’s music to the ears of those that snagged him atop rookie drafts in 2021 and patiently held on to him through a lost rookie season.

About: Zeke has been a fixture for the Cowboys and fantasy players for years. He’s consistently produced big numbers, but it’s impossible to miss the slow and steady decline over the past few years. This year it’s come to a head as Tony Pollard—in a contract year no less—has looked like the better, more explosive part of the Cowboys backfield. Perhaps you haven’t felt the impact as much since Zeke has 12 touchdowns in 17 weeks, helping to offset his diminished rushing and receiving numbers. But make no mistake, this is the off-season you need to target moving Zeke while his perceived value is still high. He has 866 yards rushing and is averaging a career-low 3.9 yards per carry. On Thursday, with Pollard out, Zeke got 19 carries in a game the Cowboys wanted to win. He turned it into just 37 yards, averaging 1.9 yards per carry. He got a touchdown, which balanced out his fantasy day, but his time of putting up monster numbers is over. 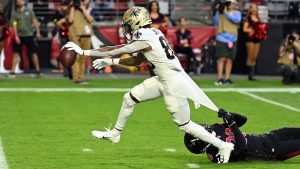 About: The end of the season is always a little bit about projecting to the future. That means looking at players on bad or injury-depleted rosters that are making the most of their opportunities. These are the kind of deep league stashes that can pay off big in the future. Shaheed has been a player that’s consistently produced, and the Saints have needed him. Michael Thomas and Jarvis Landry are on IR, while rookie Chris Olave has been injured as well. All that’s left the Saints without much going for them in their receiver room. Shaheed has helped fill the gap. Over the past four weeks, he’s caught 17 passes for 290 yards and a touchdown. He’s had at least four receptions each game, showing that if given a chance, he can be a regular contributor. When it comes to deep league stashes, you could do worse.

About: Has there been a player who made less of an impact after being traded? In 10 games since being acquired by the Cardinals, Anderson has 17 targets, resulting in seven receptions for 76 yards. That’s about half the number of receptions and less than half the yardage he had in the first six games in Carolina while mired among one of the worst offenses in the NFL. In short, Anderson has been a complete and total bust. Life moves fast in the NFL, even faster in fantasy football. If you’ve rostered Anderson this season, you know he’s been unplayable. After washing out in Carolina and seeming like the sixth or seventh-best receiver at best for the Cardinals, it’s hard to imagine much of a robust market. That leaves me believing he’s droppable at this point.

About: McBride was largely viewed as the best tight end prospect in the 2022 NFL Draft, but his landing spot was a tough nut to crack. It appeared to be a good offense in Arizona, but he was clearly buried in the target order on a team with Zach Ertz at tight end, not to mention DeAndre Hopkins, Marquise Brown, and Rondale Moore at receiver. When Ertz was lost for the year, it was McBride’s chance to step up. So far, that’s worked out. Over the last four weeks, he’s seen 25 targets, turning that into 17 receptions. His yardage and touchdowns aren’t eye-popping, but he’s making the most of opportunities. It can often take a while for young tight ends to get seasoning. McBride is making contributions and showing that his future could be bright.

About: A few years ago, Hooper looked to be a tight end on the rise. He signed a massive free-agent contract with the Browns and looked like a potential fixture at the position. Two middling years in Cleveland ended with Hooper being released. When he landed with the receiver-starved Titans this off-season, hope returned once more. And yet, it’s been unfounded. In 16 games, he has fewer receptions and fewer touchdowns than in either of his Cleveland seasons. He also appears to have been passed by rookie Chig Okonkwo on the depth chart. In short, Hooper is a low-end TE2 that’s quickly becoming a sunk asset.