Week 5 of the NFL season was something… We saw some great performances, some bad performances, injuries and even the first coach fired. But that’s all part of the challenge of managing your fantasy team. If you play Dynasty, you’re in it for the long haul. Still, it’s a weekly game, and you have to ride the ebbs-and-flows and see what it can mean for the trajectory of a player. That’s what the Stock Watch is all about. We watch the games, process the information, and try to forecast where players are headed. After all, getting ahead of the curve is the way to succeed. So, below you’ll find one player that improved their position and one that’s going the wrong way from each position. Use this as a guide as you’re trying to make moves and evaluate your team this week! 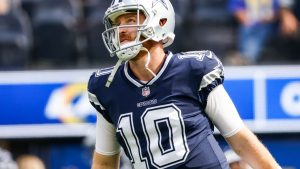 Stock Up: Cooper Rush, Dallas Cowboys
About: The most important position on a team is quarterback, but arguably the most overlooked place is backup quarterback. There aren’t enough good quarterbacks to start for all 32 teams most weeks, so having a quality backup is a luxury. It can also be the difference between the playoffs and a lost season when your starter suffers an injury. The Dallas Cowboys know that all too well. When Dak Prescott injured his thumb in a loss in Week 1, it looked grim for the Cowboys. And yet, after four games without Dak, the Cowboys sit at 4-1, right behind the Eagles as they prepare for a Week 6 showdown. Dak is on the cusp of returning, but he’s returning to a team in great shape thanks to Rush, the Cowboys’ backup quarterback. Rush is 4-0 in spelling Dak this year and 5-0 as a starter in his career. While his numbers haven’t been eye-popping, his steady presence and success have raised Rush’s profile, if nothing else. He is an ideal stash, particularly in dynasty, because there will be plenty of demand heading into 2023, and as we’ve seen, the draft isn’t always the answer.

Stock Down: Baker Mayfield, Carolina Panthers
About: Mayfield was once the No. 1 overall pick. He also led the Cleveland Browns to the playoffs—and a playoff win over the Pittsburgh Steelers. But last season wasn’t kind, and the Browns turned the page this off-season. That left Mayfield as a player without a team. He landed with the Panthers late in the off-season, and it seemed like a chance to turn things around. That opportunity has turned into a nightmare. Mayfield is 1-4, completing less than 55 percent of his passes for 962 yards, four touchdowns, and four interceptions. Head Coach Matt Rhule was fired, and he’s likely a part of the problem, but there’s plenty of blame. Mayfield has been so bad fans are clamoring to see Sam Darnold again. That’s a grim sign. Even in a league needing quality quarterbacks, it’s impossible to imagine Mayfield as one of 32 starters next September. If you’ve been holding him in dynasty, it might be time to cut your losses.

Stock Up: Ken Walker, III, Seattle Seahawks
About: It wasn’t a great draft for running backs. Only a couple seemed to land in spots where they could contribute. One of those that retained value in Rookie Drafts was Walker, the second running back drafted, who landed in Seattle. But the off-season and the start of 2022 seemed to diminish that campaign. Walker wasn’t available in Week 1 and barely made a dent in Weeks 2 through 4, while Rashaad Penny led the Seahawks’ ground game. Week 5 changed all that. Not only did Penny suffer an injury that will likely end his season, but Walker also looked good in replacing him. He had eight carries and took it for 88 yards and a touchdown. He gets rush-friendly matchups in the next three games with the Cardinals, Chargers, and Giants. Now is the time to buy low and get ready to see Walker finally take off.

Stock Down: Antonio Gibson, Washington Commanders
About: In his first two years, Gibson looked like a steal. I, like many, snagged him in the Third Round of my rookie draft and quickly got a running back that was a weekly play. Seeing the Commanders re-sign J.D. McKissic and draft Brian Robinson this off-season was a worrying sign. Both players are healthy and in action, while Gibson’s production has been unimpressive. Through five games, he’s carried 56 times for 179 yards and two touchdowns, averaging 3.2 yards per carry. He’s added 16 receptions for 134 yards, but that’s hardly the production you’re looking for from a weekly starting option. That’s because Gibson is no longer a reliable start. It also looks like his long-term future is anything but secure. If you can get something in return, I’d do it now. If not, I hope you’ve got other options—and Robinson—on your roster.

Stock Up: Alec Pierce, Indianapolis Colts
About: No team has needed a No. 2 receiving option more in the past few seasons than the Colts. We’ve seen various players get a shot, but nothing has stuck. This off-season, the team drafted Piece out of Cincinnati, and optimism grew that he could fill that role. We didn’t see it consistently during Training Camp and the early going of the season, but Pierce was undeniably one of the few bright spots in a dreadful Thursday night game in Week 5. He saw a season-high nine targets, catching eight for 81 yards. But it wasn’t just the production; it was how he got the production and the situations where he was targeted. It was clear Pierce earned some of Matt Ryan’s trust, which means nothing but good things going forward. Those who snagged Pierce hoping to find a viable starting option can take heart that it’s finally starting to materialize. 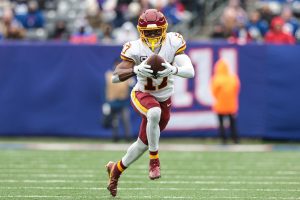 Stock Down: Terry McLaurin, Washington Commanders
About: McLaurin has been the Commanders’ passing game for a few seasons, which made it no surprise that he got a lucrative extension this off-season. With Carson Wentz in town, it seemed like the Commanders’ pass offense was poised to take a step forward—and it has. Wentz is QB7 through five weeks. But, the emergence of rookie Jahan Dotson and veteran Curtis Samuel has meant the pass offense is being spread around. That hasn’t been a good thing for McLaurin. After seeing 130 or more targets the past two seasons, McLaurin has seen 33 targets, catching 19 passes for 326 yards and a touchdown through five games. It’s early, and McLaurin has talent. But it’s also appearing as though he might not be the rock-solid start he once was. He’s currently WR31, meaning he’s still a WR3 but sliding further away from the WR1 upside he seemed to have going into the season.

Stock Up: Hayden Hurst, Cincinnati Bengals
About: The Bengals’ pass offense is loaded. The team has Ja’Marr Chase, Tee Higgins, Tyler Boyd, and Joe Mixon, among others. And yet, in a crucial divisional game with the Ravens on Sunday night, the team’s leading receiver was Hurst, who caught six passes for 53 yards and a touchdown. Hurst has seen seven or more targets three times in five games and only has one game with fewer than seven PPR points. Hurst is an active part of a solid pass offense at a position that’s been a gamble. You could do worse, especially for a guy flying under the radar.

Stock Down: Albert Okwuebunam, Denver Broncos
About: Oh, Albert O. When Noah Fant was included in the trade for Russell Wilson this off-season, it seemed like wheels up for the young tight end. Then the Broncos signed Eric Tomlinson and drafted Greg Dulcich. Still, Albert O. appeared to be the top man on the depth chart. That, unfortunately, hasn’t equated to production. Through five games, he’s seen 11 targets, catching seven passes for 50 yards. With Dulcich returning from IR, there’s even talk of him being released. In short, it’s time to let go of the idea he’s in for any role with the Broncos.

Week 12 was an adventure, beginning with the large number of quarterback…
YouTube Video VVVBdGtRNkIwc1NZUHJ5WFNxUXIxb3JBLkdYSnQxaG5CdWpn