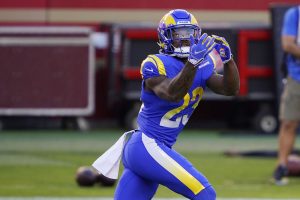 With the 2022 NFL Draft in the books and Free Agency mostly wrapped up, it’s time to turn our attention to the upcoming season. Throughout the off-season I’ll be looking at some position groups that featured new additions and could have a new look come September. Today, looking at the backfield for the Los Angeles Rams.

The 2021 season was supposed to be the year Cam Akers took a step forward. Akers, a Second-Round pick in the 2020 NFL Draft, showed flashes as a rookie. In 2021, his second season, many thought he’d take a step forward. Instead, he tore his Achilles prior to the start of the season. That left Darrell Henderson, Jr., as the primary ball carrier, while the Rams moved quickly to add veteran Sony Michel. Together, that backfield was enough to carry the Rams through the regular season and to a playoff berth.

An Achilles injury is usually season ending. In fact, for running backs, it was once viewed to be career threatening. But Akers defied those odds. He actually returned during the regular season. He appeared in one game, seeing five carries for three yards and three receptions for 10 yards. It wasn’t incredible production, but simply making it back to the field was incredible. It was in the playoffs that Akers made his truly remarkable contributions.

Akers appeared in all four of the Rams’ playoff games, starting three. He carried the ball 67 times for 172 yards and caught eight passes for 76 yards. Again, not eye-popping numbers, but remarkable given his injury. The Rams won the Super Bowl and now will head into 2022 the Defending Champions, looking to do it again.

So, is 2022 now the year when Akers is poised to break out. Optimism is once again high, but should it be? Akers showed he could come back and carry a load—seeing 17 carries against the Cardinals and 24 carries against the Buccaneers—but he didn’t enjoy great success. He averaged just 2.6 yards per carry. That could be a back working back into shape against tough competition, or it could be a sign of diminished burst due to his injury. The sample size and situation is too small to tell.

What’s clear is the Rams will continue to use multiple backs, as the team has since Sean McVay took over. McVay came to the Rams in 2017, inheriting star running back Todd Gurley. While Gurley had more than 250 carries in 2017 and 2018, since then the team has used more of a group approach. That aligns with what McVay did as Offensive Coordinator for Washington prior to coming to the Rams.

The 2022 Rams’ backfield will likely be led by Akers, but there are other options on the roster. Henderson, going into his fourth season, has been productive at times. Henderson finished as RB27 in 2021 leading the Rams’ backfield. Michel, meanwhile, finished as RB32. While Michel moved on this off-season, the Rams reloaded by snagging Notre Dame running back Kyren Williams in the Fifth Round. Williams carried the ball 415 times for 2,127 yards and 27 touchdowns the last two seasons.

Last season was a two-headed backfield for the Rams, with Michel seeing 208 carries and Henderson seeing 149. The more touchdowns and better receiving numbers boosted Henderson to the higher fantasy finish. With Akers back, and likely the lead back, the question is workload. I suspect Akers, if healthy, can see 200-225 carries, with Henderson getting 125-150. I suspect the team will continue to use a multi-back approach, especially given the rigors of the long NFL Season. Akers is currently going as RB17, which speaks to the enthusiasm that he could be a bell cow back. Henderson is going as RB43. Last year, Henderson and Michel finished much closer.

I like Akers, but RB17 feels ambitious. I’d prefer him as a low-end RB2 with some potential to swing higher. Henderson, meanwhile, could well be a steal at that ADP, especially if Akers misses time. The wild card is Williams. We’ve seen running backs take time to get a shot with the Rams, and that’s likely the case with Williams, too. Henderson is in a contract year and I suspect he won’t be back, meaning Williams could be a good stash with an eye toward 2023 and the potential to return some 2022 value if there’s an injury.