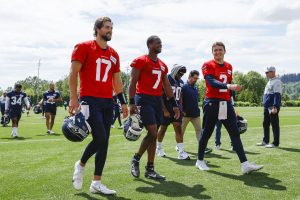 With the 2022 NFL Draft in the books and Free Agency mostly wrapped up, it’s time to turn our attention to the upcoming season. Throughout the off-season, I’ll be looking at some position groups that featured new additions and could have a new look come September. Today I head back to Seattle, this time to think about quarterback. Their franchise man is gone, Drew Lock and Geno Smith are in. Who should we want and, more importantly, should we care at all? Let’s dive in.

The season didn’t go well for the Seahawks in 2021. The team finished 7-10, becoming the only team in the NFC West not to qualify for the playoffs. One thing that was rock solid was quarterback Russell Wilson, who threw for 3,113 yards and 25 touchdowns. All that while missing three games with a thumb injury. Wilson has been a stalwart for the Seahawks at quarterback since he was drafted in the Third Round of the 2012 draft. He went 104-53-1 as a starter, appearing in the playoffs seven out of nine seasons and the Super Bowl twice. But the marriage between star quarterback and franchise came to an end this off-season, as Wilson was traded to the Denver Broncos. In return, the Seahawks got several picks, tight end Noah Fant and a possible Russell Wilson replacement.

Lock was drafted in the Second Round of the 2019 draft by the Denver Broncos. He was the last significant quarterback selected in a draft by John Elway, who thought he might be a franchise quarterback for the Broncos. It never happened. Lock injured his thumb during pre-season prior to his rookie year, only appearing in five games. He went 4-1 in those starts, giving hope that he might be the answer.

In 2020, Lock started 13 games for the Broncos, struggling with turnovers and inefficiency. He finished 4-9 as a starter during the season. Going into 2021, the team added veteran Teddy Bridgewater, who beat Lock out during training camp. Lock ended up starting only three games for the Broncos in 2021, all losses. It wasn’t all his fault, but it was clear the Broncos’ management no longer viewed him as the answer. Lock finished 8-13 as a starter, throwing for 4,740 yards, 25 touchdowns, and 20 interceptions in three seasons. Now, in the final year of his rookie deal, he’s headed to Seattle.

While those outside the team have waited for a move to add to the position, Pete Carroll has been praising Lock. So, it appears that the Seahawks are content to roll into the season with the group they have at quarterback. In addition to Lock, the Seahawks have former Colt Jacob Eason and veteran Geno Smith. Smith was once a Second Round pick himself, drafted by the New York Jets. He bounced around with the Giants and Chargers before landing with the Seahawks, where he started three games in place of Wilson in 2021. Smith is 13-21 career as a starter, with 6,917 yards, 34 touchdowns and 37 interceptions. It seems that, barring another move, the Seahawks’ competition will be down to Lock and Smith.

It’s possible the Seahawks are playing chicken, banking on Mayfield and/or Garoppolo to be released so they can sign them cheaper. If that’s the case, this discussion could be moot. But I don’t think the Seahawks are looking to add to the quarterback room. The team is likely in some kind of rebuilding mode and it’s quite possible they aren’t trying to win in 2022. That’s not great news for those who roster D.K. Metcalf, Tyler Lockett and Fant, but it seems to be a potential reality as the season approaches.

If it is down to Smith and Lock, who wins and does it matter? The early buzz is the competition is neck-and-neck. Personally, I think the Seahawks will want to see what they have in Lock. If the competition remains close through camp, I suspect Lock gets the nod. That will be the chance to see if he just needed a chance of scenery. Either way, I think both Lock and Smith play at some point and neither are worth an investment in dynasty at this point. I wouldn’t expect either to rise above QB3 numbers for the 2022 season.

Chris Moxley (@chrismoxley19) breaks down the fantasy relevant players and favorite stashes for Conference USA in 2022.