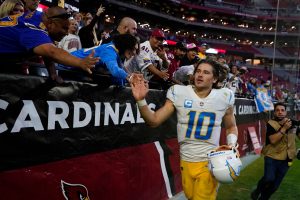 Week 12 was an adventure, beginning with the large number of quarterback changes. This week features some crucial matchups, so the pressure is on. Combined with injuries, you’re likely looking at some tough choices. Such is life in the NFL. While we’re all blissfully rejoicing the return of the NFL, with it comes the specter of lineup decisions. Who should start? Who should sit? Let this weekly post be your guide as I go on a journey with you these next 18 weeks.

The criteria is simple: I pick one sit and one start from each position (quarterback, running back, wide receiver and tight end). This is based on my rankings for each week, which you can find in full at www.campus2canton.com. The standard is Top 12 for quarterbacks and tight ends, Top 24 for wide receivers and running backs. Each week I’ll begin with a review of how I did the previous week because accountability is a part of this process.

Before we move forward, let’s look at how I did in Week 12.

Start: Justin Herbert, Los Angeles Chargers
About: In his third season, Herbert and the Chargers began the season under the weight of expectations. That hasn’t panned out as expected, with the Chargers sitting at 6-5 and needing a strong closing stretch to even make the playoffs. Herbert began the season with a rib injury and has endured most of his best weapons being injured throughout the season. And yet, he’s QB9. Rumors of his decline have been greatly exaggerated. With Josh Palmer and DeAndre Carter coming on, and Keenan Allen, Mike Williams, Austin Ekeler and Gerald Everett tracking to play, I suspect we’ll see a big week from Herbert against the Raiders.

Sit: Tom Brady, Tampa Bay Buccaneers
About: Brady is a miracle. He’s the greatest of all time and still playing at a fairly high level despite being in his mid-40s. And yet, this hasn’t been an incredible season. The Buccaneers are just 5-6 and their offense has sputtered. Brady has routinely been a bankable QB1 but this year he’s QB18, averaging less than 16 points per game. He’s also struggled against the Saints since joining the Buccaneers. I’m not relying on him as a Top 12 option in this crucial Week 13.

Start: Nick Chubb, Cleveland Browns
About: I know there’s been a lot of talk about the quarterback for the Browns as Deshaun Watson returns to the lineup. But the focus of the Browns’ offense in Week 13 should be on the ground game. That’s for two reasons, the first of which is how good Chubb has been. Through 12 weeks, he’s RB5 on the season, averaging 18.9 points per game. The second reason is their opponent—the Houston Texans. The Texans are a bad team, but they’re particularly bad against the run. The team ranks No. 32 in rush attempts and rush yardage against, finishing bottom five in rushing touchdowns and yards per carry. In short, it’s strength versus weakness with Chubb going against the Texans and the Browns should take advantage. So should you if you put him in your lineup.

Sit: Cam Akers, Los Angeles Rams
About: The roller coaster with Akers and the Rams continues. For a while, it seemed like Akers was done. He was a healthy inactive for personal reasons. The team was rumored to be looking to trade him. That trade didn’t happen, then Akers slowly returned to the Rams’ lineup. Then, in a twist, fellow running back Darrell Henderson, Jr., was released, leaving Akers as the man. That resulted in eight carries for 37 yards in Week 12. Yes, Henderson is gone and Cooper Kupp and Allen Robinson are on injured reserve. Still, I’m not trusting the production I’m getting from Akers in my lineup in this crucial matchup.

Start: Ja’Marr Chase, Cincinnati Bengals
About: Chase has been out of action for a few weeks, but before his injury he was on a tear. He nearly qualified to return in Week 12 and should be ready to return for a crucial Week 13 matchup. If he does, I’m expecting big things. Not only has Chase been having a big season, but he was also incredible against the Chiefs in 2021. In their regular season matchup, Chase caught 11 passes for 266 yards and three touchdowns. The Bengals once again need a big win and are hosting the Chiefs in a December game. I expect Chase to eat. 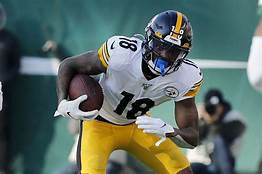 Sit: Diontae Johnson, Pittsburgh Steelers
About: I don’t want to sound like a broken record, but Johnson isn’t a reliable bet for fantasy. He’s a talented receiver but he thrived the past few years on incredible volume and scoring opportunities. That’s not the case in 2022 with a poor offensive line and a rookie quarterback in Kenny Pickett. Johnson is WR40 on the season, averaging just over 10 points per game. He’s still a flex option, but he’s not a reliable WR2 this season.

Start: Dalton Schultz, Dallas Cowboys
About: Schultz was one of the best tight end options in 2021, a season that earned him the Franchise Tag this off-season. I thought based on talent and opportunity that he had a chance to be the TE1 this season. But Dak Prescott got injured, then Schultz got injured, and it was a struggle. Of late, we’ve started to see the upside I thought we’d get in 2022. In his last three games, Schultz has 13 receptions and three touchdowns. At a position that’s been riddled with injuries and inefficiency, that’s the kind of production you’d like to see. I’m starting Schultz.

Sit: Austin Hooper, Tennessee Titans
About: I get it, in week 10 Hooper caught five passes and in Week 11 he caught two touchdowns. Those seem like promising signs of life. I think Hooper has talent as a receiver, which we’ve seen before, and his landing spot in Tennessee seemed promising. Unfortunately, there isn’t enough volume to rely on him. He has just 24 receptions and two touchdowns all season. Until we see more consistent volume and production, I’m not trusting him as a Top 12 option.