We’ve reached championship week for fantasy. This is the final week where the Sit/Start decisions matter. And, like other weeks, we’ve been thrown a few curveballs. Never fear! We’re in this together, and I’m here to help give suggestions as you make decisions to try and claim a fantasy championship.

The criteria are simple: I pick one sit and one start from each position (quarterback, running back, wide receiver, and tight end). This is based on my rankings for each week, which you can find in full at www.campus2canton.com. The standard is Top 12 for quarterbacks and tight ends and Top 24 for wide receivers and running backs. Each week I’ll begin with a review of how I did the previous week because accountability is a part of this process.

Before we move forward, let’s look at how I did in Week 16.

Now, on to the Week 17 suggestions!

About: It’s been two weeks since White got his ribs crunched. During that time, the Jets lost two more games and decided that Zach Wilson is most definitely not the option. He’s going to be inactive in Week 17 while White goes back to the starting role. The Jets are 7-8 and need a win. The Seahawks’ defense has been vulnerable, and that’s good news. In his three starts, White averaged more than 18 fantasy points, finishing as QB10. It’s a big week, but I believe in Mike White!

About: The Raiders are 6-9 on the season and have missed the playoff window. It’s been a frustrating season, and the offense has been inconsistent. As a result, the Raiders have decided to sit starting quarterback Derek Carr for the final two games and give Jarrett Stidham a shot. Perhaps Stidham will be better than I think. Maybe he’ll look good in the offense. For me, the Fantasy Championship game isn’t a time when I’m trying to find out. Stidham is on my bench, along with other Raiders. More on that in a minute. 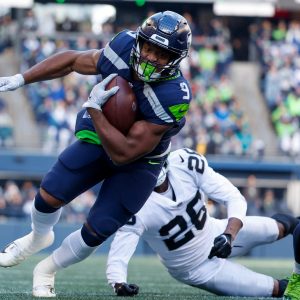 About: Running back has been a tough position this season. We’ve had injuries and inefficiency. Walker hasn’t escaped the injury part, but when he’s been on the field, he’s been solid. He took over as the Seahawks’ starter in Week 6, and since then, he’s not only RB12 in total points, he’s RB12 in points per game, averaging more than 16 points per game in his nine games. It’s a tough matchup, yes, but the Seahawks need a win, they’re at home, and Walker is in. I’m starting him.

About: I like Swift as a player, and he certainly has some boom potential. But he hasn’t gotten the volume this season. He has only 82 carries and 37 receptions through 16 weeks of the NFL season. Swift is just RB27 on the season, despite being a near consensus option as a Top 12 running back going into the season. If you need production, I’m not convinced he gives you a Top 24 return.

About: Sure, the Eagles are without Jalen Hurts. But they’re facing a Saints’ defense that hasn’t been shut down, and they’re at home with Gardner Minshew. In his first start against a stout Dallas Cowboys defense, Minshew managed to find Brown six times for 103 yards on eight targets. Brown is WR5 on the season, averaging nearly 18 points per game. Minshew doesn’t scare me. The Saints don’t scare me. Brown is in my lineup.

About: This probably doesn’t surprise you that much if you read my thoughts on Stidham above. We’ve seen it before, most notably in Week 16 when DeAndre Hopkins played with Trace McSorely. Hopkins was held to just one reception for four yards on 10 targets. Even great receivers can’t overcome offensive issues. The Raiders are playing the 49ers. They’re starting Stidham. I love Adams’ talent, but he’s not a reliable choice this week. 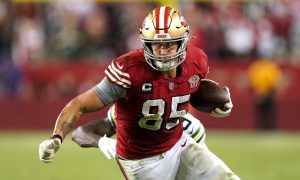 About: It’s been two games since Deebo Samuel was lost to injury. In that time, Kittle has exploded. He has 10 receptions for 213 yards and four touchdowns on 13 targets. In short, he’s exploded. He’s become the cog through which the pass offense flows, and I don’t think that changes in Week 17. Kittle has tremendous upside, and he’s getting good volume. He should be in your lineup.

About: Kmet is a player with talent and potential, but we haven’t always seen that on display in Chicago. Still, in the middle of the season, he seemed to explode. During a three-game stretch from Week 8 to Week 10, Kmet caught five touchdown passes. It was fair to get excited. But in the rest of the season before and since, he’s only had one game with more than five receptions and only one game with more than 50 yards receiving. He also hasn’t had touchdowns outside of that stretch. All that makes him appealing on paper but risky in practice. Could he get a touchdown against the Lions? Sure, he could. If he doesn’t, that likely won’t be enough points to help you win.

The 2022 NFL Season is nearly over. We have just one more…
YouTube Video VVVBdGtRNkIwc1NZUHJ5WFNxUXIxb3JBLnFiUVBvMEFSNHZB

Using metrics to grade EDGE rushers, Justice gives us his top ten EDGE players in the…

The 2022 NFL Season is nearly over. We have just one more…