The 2022 NFL Draft is in the books. It was three crazy days full of draft picks and trades that altered the landscape of the NFL. As we dive head long into Rookie Draft season, followed by Training Camp and the start of the 2022 NFL Season, it’s a good time to take a moment to see who benefitted and who saw their fortunes change during the draft. In the feature below, I’ll offer one winner and one loser from each of the major fantasy relevant positions—QB, RB, WR and TE.

Hurts was a surprise Second Round pick in the 2020 NFL Draft who ended up starting a few games to end the season. Last off-season, the Eagles appeared to commit to Hurts when they dealt former franchise QB Carson Wentz. But it seemed to be a lukewarm commitment. Hurts had a decent season and heading into his third season and second full year as a starting QB, he’s being given the tools to either step up or step out. The Eagles didn’t draft a QB —though Carson Strong signed as an undrafted free agent—while the team made a trade during the First Round to acquire receiver A.J. Brown. Brown then inked a four-year, $100 million deal. He has 185 receptions for 2,995 yards and 24 touchdowns in three years. He’s an elite No. 1 receiver to pair opposite 2021 First Round pick DeVonta Smith and tight end Dallas Goedert, giving Hurts an incredible set of weapons. The Eagles, who made the playoffs in 2021, are going all in building a supporting cast around Hurts for a 2022 playoff run.

After Ben Roethlisberger retired, the Steelers were looking for an answer at QB. Trubisky, a former First Round pick by the Bears, was looking for a second chance. The two seemed to find common ground as Trubisky signed a two-year, $14 million deal. It’s a contract with a low dollar amount in 2022, escalating in 2023 with an easy out option for Pittsburgh. Trubisky went 29-21 as a starter in Chicago with 10,609 yards and 64 touchdowns. He figured to easily be able to beat out Mason Rudolph. It wasn’t a great draft for QBs—in fact, only one went prior to the Third Round. That one was Kenny Pickett, the Pittsburgh quarterback drafted at pick No. 20 in the First Round by the Steelers. Trubisky may well start Week 1, but it feels like just a matter of time before the hometown kid ascends to the starting position, especially if Trubisky struggles in the competitive AFC North.

Last off-season, Conner was a veteran who caught on late. He signed a one-year, medium money deal with the Cardinals to see if he could revive his career. He did just that. Splitting time with Chase Edmonds, he responded with an 18-touchdown season for the playoff-bound Cardinals. He was rewarded with a new three-year deal, while Edmonds moved on. The Cardinals figured to add more bodies to the backfield but haven’t grabbed any free agents and added only Keaontay Ingram in the Sixth Round, who joins Eno Benjamin and journeyman Jaylen Samuels and Jonathan Ward on the roster. The Cardinals could add more but in the wake of the draft it seems like a big vote of confidence in Conner.

A Fourth-Round selection a year ago, Carter had a solid rookie season, appearing to take control of the Jets’ backfield by the end of his rookie year. In 11 starts he rushed for 639 yards and four touchdowns, catching 36 passes for 325 yards. He seemed like an up-and-coming dynasty RB on a building Jets team. Then, at the top of the Second Round, the Jets selected Iowa State running back Breece Hall, a three-down workhorse that is regarded as the best back in the draft. Hall figures to be the starter, leaving Carter’s role uncertain at best. Those that bet on him as a potential RB2 need to look elsewhere. 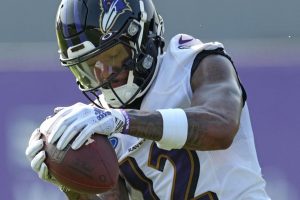 Bateman was a First-Round pick in the 2021 draft but he didn’t have a spectacular season. Limited to 12 games and four starts, he caught 46 passes for 515 yards and a touchdown. The hope for fantasy players was he’d take a step forward in 2022, vying for targets with TE Mark Andrews and top receiver Marquise Brown. When Brown was traded to the Cardinals during the First Round of the 2022 NFL Draft, it created an opening for Bateman. The Ravens also didn’t select a Wr despite 11 picks. While the team may grab an available veteran to add to a group that includes Devin Duvernay, James Proche and Tylan Wallace, the draft seems to be a big boost to Bateman’s stock heading into the 2022 season.

The draft changed the stock of a lot of Cardinals players. Moore become the second to appear in this column, this time in the loser list. The shifty receiver was taken in the Second Round and many wondered how he’d be used in the up-tempo Cardinals’ offense. He caught 54 passes, but for only 435 yards and a touchdown. In Year 2, the hope was his opportunity would increase alongside returning star DeAndre Hopkins. Just before the draft the Cardinals re-signed veteran A.J. Green then, during the First Round, the Cardinals traded the No. 23 pick for Marquise Brown, who saw 146 targets and caught 91 passes in 2021. With Hopkins, Brown and Green in the fold, along with a trio of options at TE, Moore has no clear path to an increase in role or targets.

Dulcich, out of UCLA, was snagged by the Denver Broncos in the Third Round of the 2022 NFL Draft, and he lands in a great spot to contribute right away. This off-season the Broncos traded Noah Fant to the Seahawks as part of the package to acquire Russell Wilson, leaving former Fourth-Round selection Albert Okwuegbunam as the likely starter. Dulcich caught 77 passes for 1,353 yards and 11 touchdowns with the Bruins. His draft capital and the opening for the Broncos gives him a great chance to get targets in year one, making him an attractive rookie draft option in the late Second or early Third Round of rookie drafts.

The Jets mostly had a fantastic draft, grabbing impact players on offense and defense. On paper, snagging Ruckert in the Third Round seems like a continuation of that work. But it’s a curious situation for the rookie, who enters a position group where not one but two veterans were signed as free agents to multi-year contracts this off-season. Ruckert will be competing for targets with Tyler Conklin and C.J. Uzomah at TE. And with a loaded receiving corps that includes Elijah Moore, Braxton Berrios, Corey Davis and No. 10 overall pick Garrett Wilson. That combined with an offensive scene that seems predicated on a strong run game and it’s unclear what kind of path to targets Ruckert can get with the Jets. That makes him a dicey selection even in the late round of rookie drafts.

Matthew Fox is a member of the FSWA. He’s a die-hard NFL fan and Broncos’ homer. You can find more from him on Twitter @knighthawk7734 or as co-host of the Fantasy Football Roundtable Podcast, a part of the Campus2Canton Network.