Michael Mayer vs Arik Gilbert – The Race for Devy TE1

If I wrote this article a year ago, it would be relentlessly mocked. Arik Gilbert was the highest-rated tight end recruit ever from 247Sports. Mayer was a player who couldn’t hold onto his 5-star ranking at Rivals and was surpassed by Darnell Washington. Although Mayer was an outstanding recruit in his own right, Gilbert was regarded as special: an athletic freak who posted an insane 101 receptions, 1,760 yards, and 17 touchdowns his senior year. His accomplishments earned him the 2019 – 2020 Gatorade National Player of the Year in Georgia. Gilbert then enrolled at LSU and was one of the more exciting players headed to a Tigers team fresh off a National Championship.

A year later, things have changed (in case you haven’t noticed). And although Gilbert is still the TE1 according to our rankings, the gap is narrowing. Even more jarring, there’s no longer a consensus. Mayer is picking up steam, and rightfully so.

In a pandemic season where freshmen had trouble producing. The 6’5” 250-lb Mayer was the exception. At a position where players rarely produce year one. Mayer was the exception. Notice a trend? Mayer is an exception and his production last season was enough to earn a spot on The Athletic’s Freshman All-America First Team and 247Sports True Freshman All-America Team. While his raw totals don’t jump off the page (42 receptions for 450 yards), his 15.8% market share is one of the best freshman seasons in the last decade, rivaled by current New England Patriot Hunter Henry, and is better than the last few years of draft prospects. 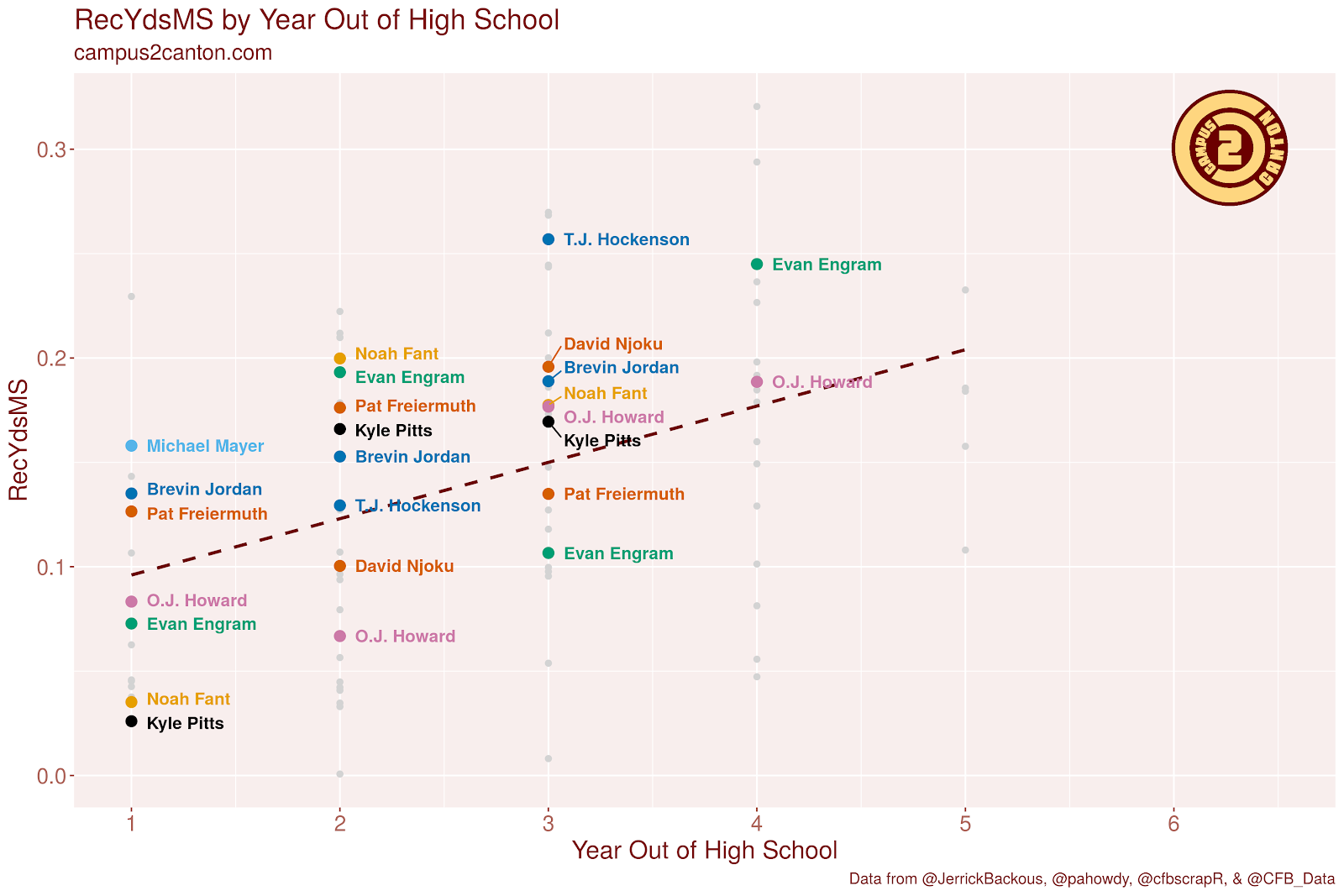 This chart, found only on Campus2Canton.com, compares Receiving Yards Market Share (in percentage) of Michael Mayer’s freshman season to past and 2021 highly regarded tight ends.

Mayer’s production is fantastic when put in the context of his offense. Still, it becomes even more striking when considering the factors that led to him being the Irish’s number two receiving option. First, consider the suspension of practice and the COVID-19 outbreak that ravaged the Irish in the spring. This situation was not unique to South Bend nor other first-year players around the country. Despite the setback, Mayer continued to be a prolific producer without the early reps. Second, while most colleges fail to produce quality players at tight end, Notre Dame had another tight end and potential Day Two pick, Tommy Tremble. Although Tremble was not used as the primary receiving option, Mayer was able to step in and play alongside another very good player at the position.

Maybe in another season, Mayer would’ve seen even more recognition. But the multitude of non-football storylines and Notre Dame’s lack of offensive firepower brushed the freshman phenom to the side. Now, with a full season under his belt, (hopefully) uninterrupted spring/summer practices, and the recognition as the undisputed alpha in the tight end room, it’s wheels up for Mayer in 2021.

While Michael Mayer became a steady option for the Irish, Arik Gilbert has been anything but. Truly one of the best prospects the position has ever seen, Gilbert, the 6’5” 250-lb super-recruit, had high hopes when he arrived in Baton Rouge a year ago. The Tigers were a team coming off a National Championship and were restocking the cupboards with multiple 5-star receiving threats headlined by uber-prospect Gilbert.

However, things didn’t go exactly as planned for either party. Amidst rumors he was homesick and sitting out practices, he opted out after eight games and proceeded to enter the transfer portal in early January. Since entering the portal three months ago, Gilbert has committed to Florida, de-committed from Florida, re-entered the portal, and, as of this week, is once again… in Baton Rouge. Like Michael Corleone says in Godfather III, “Just when I thought I was out, they pulled me back in” (terrible movie, great quote.)

A saga that would be laughed at in Hollywood for being too absurd has unfolded for Gilbert and the Tigers. While the drama is one thing, Gilbert’s profile now has another layer of risk added. A once truly special recruit, Gilbert is now facing uncertainty with the next step in his collegiate career. Previously a first-round lock in TE premium, the lack of clarity should give drafters pause before selecting Gilbert, especially anywhere near a first-round draft slot. Nobody knows what the future holds for Gilbert; whether he returns to SEC play or goes the Junior College route remains to be seen. If the latter option comes to fruition, there is a good chance you’re without him on your Campus side of your Campus 2 Canton leagues. Another big risk.

In all fairness to Gilbert, though his season was tumultuous and incomplete, he was productive in the games he played (8 of a possible 10), posting a solid 12% market share and 11.3% weighted dominator on the season. This production is impressive for the same reason Mayer’s is—players at this position rarely produce early, especially in a season disrupted by the pandemic.

A once elite recruit, Gilbert’s uncertain path forward casts doubt on his long-term outlook, and the longer we wait to see what the decision is the more the risk grows.

Above I outlined the current trajectory of each player in the context of their freshman season and what their outlook may be moving forward. Michael Mayer is on the cusp of becoming one of the best tight ends in the country, while we don’t know where Arik Gilbert will play this season. Both highly regarded recruits, their arrows are now pointing in opposite directions.

Non-football concerns aside, Mayer was more productive in every category when compared with Gilbert in their respective freshman seasons. In some ways, this isn’t too surprising. Mayer played in all of his team’s games while Gilbert opted out. However, this difference is intrinsically part of their profiles, thus the risk associated with each should be considered in a head-to-head evaluation.

Below is a chart (data courtesy of Campus 2 Canton analytics guru Jerrick Backous) comparing each in key metrics. Mayer had a dominant year and outpaced Gilbert in nearly every metric that truly matters. The argument for Gilbert is the lack of a complete season hurting his metrics and that’s fair—to an extent. Because, the lack of a complete season is not injury related or a fluke, it was an opt-out/transfer/commit/decommit/transfer/TBD…which makes missed games fair game.

dditionally, to answer the question about per-game dominance within the context of their offenses, I’ve included EPA Per Play. This metric is important when comparing the two because it is independent of playing the full-season and relies on the player’s direct contribution to the play. Mayer’s 0.69 EPAPerPlay is 23% higher than Gilbert’s 0.56 EPAPerPlay. This per game dominance from Mayer as well as his elite freshman season create an impressive player profile.

Both Michael Mayer and Arik Gilbert are excellent prospects. Both are highly-regarded recruits who were dominant with their first chance in an environment that was not at all conducive to freshman production. The elite athleticism and upside of a player like Gilbert are hard to pass on. However, Mayer’s all-time great freshman season, combined with his outstanding athleticism, is enough to put him ahead of Gilbert when factoring in the current risk profiles and on-field production.