Taking a Look at the April Rankings Update 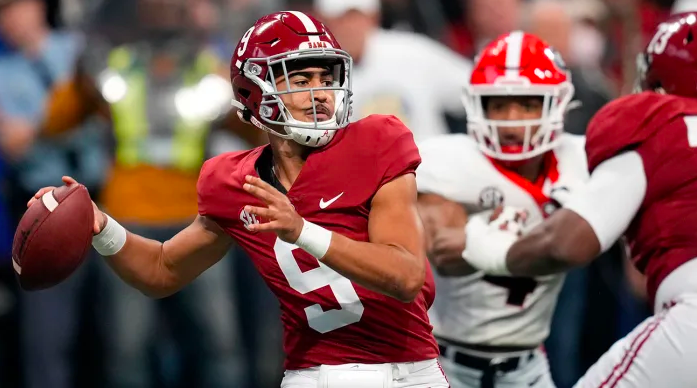 At Campus2Canton, we have over 750 college players ranked for a fantasy game in the early stages of its popularity. Ranking is a huge undertaking that we do not take for granted. Quite frankly, we embrace the challenge of this process, a challenge that does not exist for our counterparts in the dynasty rankings community.

In dynasty fantasy football, some combination of Patrick Mahomes, Josh Allen, Lamar Jackson, and Kyler Murray will likely dominate the top of Superflex rankings for the foreseeable future. But in college, the rankings landscape is volatile, shifting seemingly every quarter due to graduations, players declaring for the NFL draft and entering the transfer portal, and depth chart reports leaking from spring camps. Further, our rankings include freshmen, players who have not played a snap at the collegiate level. Those players must be sorted and ranked amongst collegiate players who have been Heisman Trophy finalists and are projected for first-round NFL draft capital.

In addition, college rankers deal with some of the same issues that plague the dynasty community: talented players land in poor situations (Kyle McCord), where the offensive scheme is not conducive to offensive production (Adam Randall), or the depth chart makes it difficult to project usage (Quinshon Judkins). There are also major injuries (Alton McCaskill) and unclear backfield situations (Notre Dame). As rankers, we balance all of these factors while weighing different levels of competition and experience, with the ultimate objective of identifying players who project to the NFL. Oh, the audacity.

With the most recent monthly rankings update, positions on players are becoming solidified, and the rankings are settling. At least at this stage. Here are some observations I’ve had this early in the offseason.

Be bullish on the freshman running backs. Three freshmen sit inside Campus2Canton’s top 15 at the position (Singleton, Blue, Robinson) and nine within the top 50. This class has an unusual number of freshmen backs who are over 210 pounds and who have posted very good mph numbers. Singleton and Blue also have pretty clear paths to playing time, with Singleton being a favorite to lead Penn State’s backfield starting Week 1.

At receiver, Adam Randall is Campus2Canton’s consensus WR 19. That may be too late. Randall has reportedly come into spring practice at 6’3″, 222 pounds. Randall is a physically imposing player, but he also possesses great size-adjusted athleticism.

This dude could be special #devy
Find his ranking at https://t.co/i5DgRG7EQh pic.twitter.com/fOwFrXrXvN

Campus2Canton’s Alfred Fernandez described Randall in the Campus2Canton Freshmen & Supplemental Draft Guide, “[H]e’s very well-rounded across the board from his releases to route running to top-end speed.”

Clemson does not have very many established receivers and was otherwise lacking big plays in 2021. There’s no reason not to believe that Randall could establish himself early atop the Tiger receiver depth chart.

One of the biggest shake-ups in the rankings from March 2021 to March 2022 is at the quarterback position. At this time last year, DJ Uiagalelei and Spencer Rattler were the consensus no. 1 and 2 players at the position. Both were justified at the time. DJU was coming off a freshman season where he played admirably in relief of Trevor Lawrence. Rattler was toolsy and developing in the system that produced top draft picks Baker Mayfield, Jalen Hurts and Kyler Murray.

We see how all that turned out.

This position seems poised for major disappointment again in 2022. Bryce Young, CJ Stroud, and Caleb Williams are the top three consensus quarterbacks. After that, the top 10 is littered with players with virtually none or no starting experience. This is why Incarnate Word to Washington State transfer Cameron Ward is my QB4. He has the tools and system to be an elite quarterback. But he also has two years under his belt.

We’ve already seen Ward play at an elite level and he’s the locked-in starter with no real threat to his starting position behind him. Don’t get me wrong. I like the players we have in the top 10. But there’s a lot of risk there.

On that note, I’m just not ready to anoint Quinn Ewers the same way that the devy community appears ready to do, including my colleagues here at Campus2Canton.

As a final note at the position, CJ Stroud is my QB1. Yes, Bryce Young is flashy and the reigning Heisman winner. But Stroud consistently makes NFL level throws in the intermediate and deep areas of the field. He also gets rid of the ball quickly. Stroud has the tools, frame, offensive scheme and supporting cast to play his way into a first overall NFL draft pick.

For the last few years or so I’ve had a player or two with little to no C2C value that I’ve touted that ended up returning some form of value. “Shooting from deep” is the obnoxious identifier from the Devy Debate podcast (available on the Campus2Canton podcast feed) that I’ve used to obnoxiously pat myself on the back for these calls. Zach Wilson, Rhamondre Stevenson, Tyler Van Dyke, Rashaad White and Jameson Williams have been on the successful end of those calls.

Back in July, we did a @DevyDebate show (E.41) attempting to identify the next Zach Wilson, Javonte Williams and Joe Burrow.

Here’s what I said then, plus a Tim Lester to Steve Neal reference that no one will get: pic.twitter.com/iY84I3kd6L

Zach Davidson, Troy Omeire, Brennan Presley and Jashaun Corbin have been on the less successful end of those calls.

This year, two candidates have emerged as shots from deep. First, Hunter Dekkers is stepping in at Iowa State for long time starter Brock Purdy. I’ve been a longtime advocate for Dekkers, the all-time record holder in Iowa for career passing yards (10,141) and career passing touchdowns (121). I like Dekkers for some of the same reasons I liked Van Dyke. Dekkers offers a thick frame, strong arm and good mobility considering his size.  But Dekkers is more likely to play a more central role in the Cyclones’ run game than Van Dyke had at Miami.

I am the highest on Dekkers at the site. He’s my QB17. He’s Campus2Canton’s consensus QB53. Austin and Colin currently have him ranked all the way down at QB75.

It must be something about the state of Iowa. My second shot from deep is Iowa running back Gavin Williams. Williams was a 3 star prospect from Des Moines. He has NFL size at 6’0″ and 211 pounds. He should lead the Hawkeyes in carries in 2022 after the departure of Tyler Goodson. Williams had nearly 100 yards rushing and provided a few chunk runs for Iowa in the Citrus Bowl.

Williams has the size and appears to pair it with the athleticism I like to see in running backs. He should also have adequate opportunity. Iowa is an old school program that wants to establish the run and play defense. The Hawkeyes ran the ball 507 times in 2021. Williams’ only real competition for touches is a scat back, Leshon Williams.

Felix H. Sharpe is a Co-Founder of Campus2Canton.com and co-host of the Devy Debate. You can yell at him @sharpereview on Twitter.

Conference Championship Saturday is a few days away. The Big 12 matchup…

After dismantling Ohio State 45-23 in ‘The Game,’ Jim Harbaugh and the…

Clemson has been here almost every year of the past decade but Drake Maye and the Tar Heels are looking to unseat the Tigers.
YouTube Video VVVBdGtRNkIwc1NZUHJ5WFNxUXIxb3JBLnNKakZsZmhldHBR