We had a fantastic week of college football. We saw #1 Alabama lose to an unranked two-loss team in Texas A&M. While this doesn’t mean that Alabama won’t make the playoff, what it does do is opens up the field a bit for some unlikely team. Iowa picked up a massive win at home against Penn State, and Cincinnati has continued their winning ways. There are plenty of scenarios where we could see both teams make the playoff, injecting much-needed new blood. Regardless of how it plays out, the Alabama loss changes everything in the college football landscape.

This season I will be bringing you a weekly column on navigating the college football landscape and its ever-changing devy values. Value can be difficult to judge, especially in leagues where there are so many different types of managers. But it’s good to get out in front of your league mates, especially in C2C. Let’s dive in.

Grayson McCall is having an excellent season in 2021. Through six games this season, he has thrown for 1,478 yards and fourteen touchdowns. McCall has also increased his completion percentage by 10% this season. McCall has proven to be one of the best quarterbacks in college football. He is currently the leader in Completion Percentage (79.8%), Yards Per Attempt (13.6), and NFL/NCAA Passer Rating (154.5/234.28). Quite frankly, he has the most efficient passing profile in the history of college football so far. He’s been that good.

McCall has worked his way into getting drafted no later than Day 2 in the upcoming draft, and I could see a team completely falling in love with his profile. He has good functional athleticism within the pocket, and his mechanics are clean. Coastal Carolina’s offense makes McCall use quick reads and quick throws, which forces him to rush his mechanics at times, but he can make pretty much any throw on the field when he’s settled in. For a player looking like just a C2C asset a year ago, his stock has risen more than anyone else in college football.

Caleb Williams has arrived. Against Texas, Williams came in to take over for a struggling Sooners team, and he was the main reason for their win. He threw for 212 yards and two touchdowns, also adding 88 rushing yards and a touchdown. Williams completely changed the entire game and its momentum. The Sooners cut the lead to 15 points before the half and then ran away with things in the second half, which allowed them to battle back and take the lead on a 33-yard touchdown run with just seconds remaining.

Williams showed everyone watching why he came in as the #1 football recruit in the country. He made two incredible throws and used his legs well. One area that sets him apart from Spencer Rattler is his ability to run and be a playmaker. He makes off-platform throws easily and plays with creativity. Something that Lincoln Riley’s offense needs. It will be interesting to see who starts the rest of the season, but William’s value has already hit first-round status in next years’ devy and C2C drafts.

This season, Xavier Worthy has been the best true freshman wide receiver in the country, and it’s not even close. Just check out the graphic below. 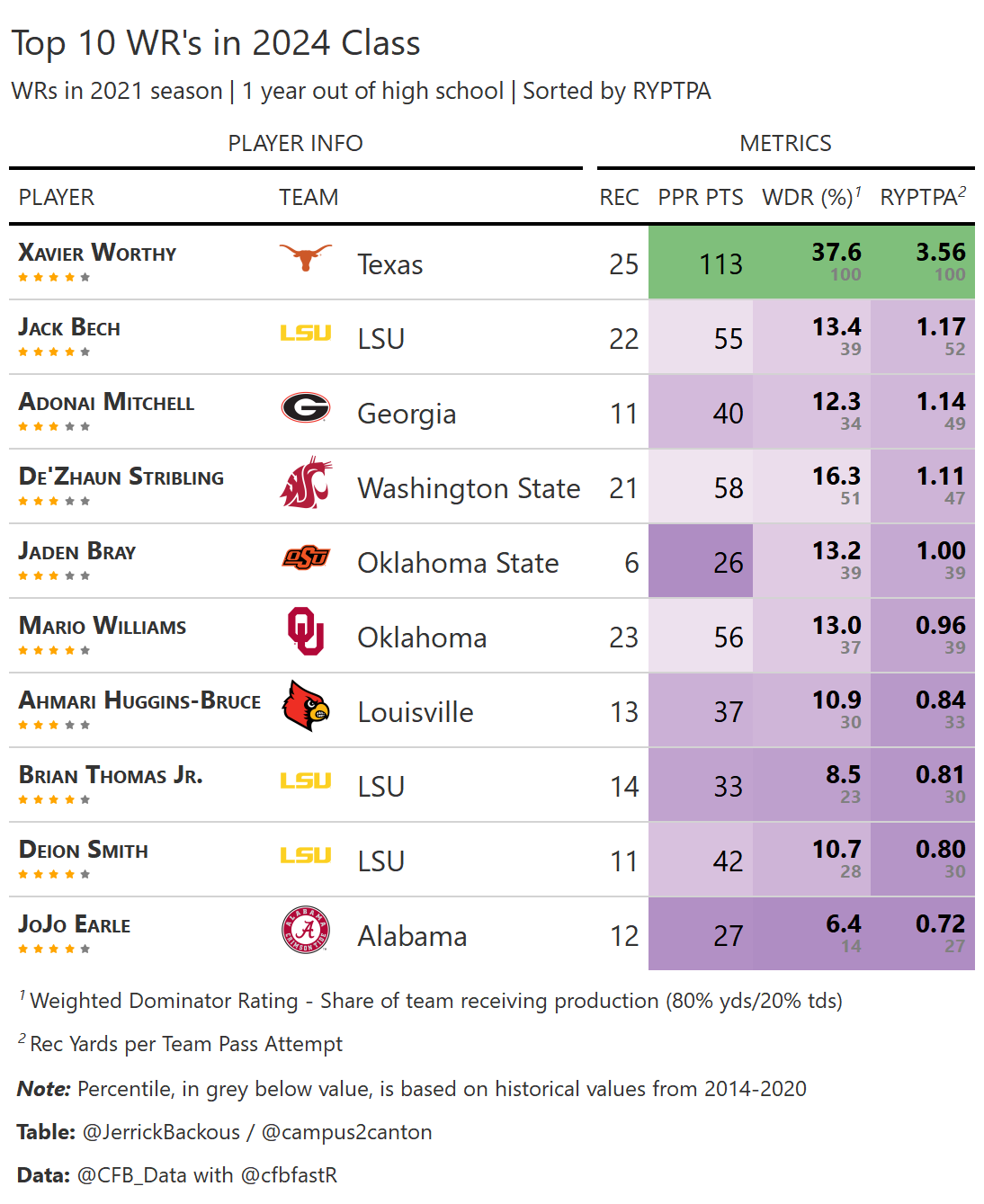 On Saturday, he exploded for 261 receiving yards and two touchdowns. He has 24 receptions for 514 yards and six touchdowns this year and has proven to be a big-play threat every time he touches the ball. Worthy leads the team in receptions, receiving yards, and touchdowns. There’s no reason not to have him as the current WR1 in the 2024 class. He’s been that good. As a receiver, Worthy’s speed is his best attribute. He’s a dynamic playmaker, and he has above-average separation. He’s a natural pass-catcher and has excellent body control. Wherever the ball gets thrown, he will catch it.

This is hard to type as an Austin Jones supporter, but Jones is no longer a C2C asset, let alone a devy relevant player. Coming out of high school, he was one of the best running backs in California history. He finished his prep career as the No. 2 all-time career rusher in Bay Area history. He had a total of 6,905 yards and 92 touchdowns on 940 rushes (7.34 yards per carry) in high school and added 1,048 yards and one touchdown on 77 receptions (13.61 yards per catch).

In 2020 he seemed to have turned a corner at Stanford, rushing for 550 yards in a shortened season, including scoring nine touchdowns. Unfortunately, he’s only rushed for 161 yards this year and hasn’t scored a touchdown. He has been a non-factor in Stanford’s rushing attack. He’s looked slow this season and has lost almost all value.

No other player in College Football has seen his stock drop as much as Spencer Rattler this season. He got benched in the Oklahoma game because of his poor play and may have lost his job for good. He showed poor leadership qualities on the sideline of that game, including walking off the field after the Sooners won and not being in the team picture.

All around, it was a terrible look from Rattler, and the question is, what do we do with him in our leagues? He’s about as untradeable as an asset gets. If Riley goes back to him, he may be able to salvage a little of his value, but I have a hard time seeing Riley do that. If he doesn’t get the starting job, will Rattler transfer? Or will he declare for the draft? There’s no way he stays in Oklahoma.  If he declares, I could see him quickly falling out of the Day 1 discussion and maybe even the Day 2 discussion. There is no scenario in which you want Rattler on your devy team right now. If he is, you have to hope he can salvage this season and show NFL scouts that he can play in the league. If he doesn’t, he may go down as one of the biggest busts in Devy history.

Big fish in a small pond. Hidden gems. Next man up. However,…